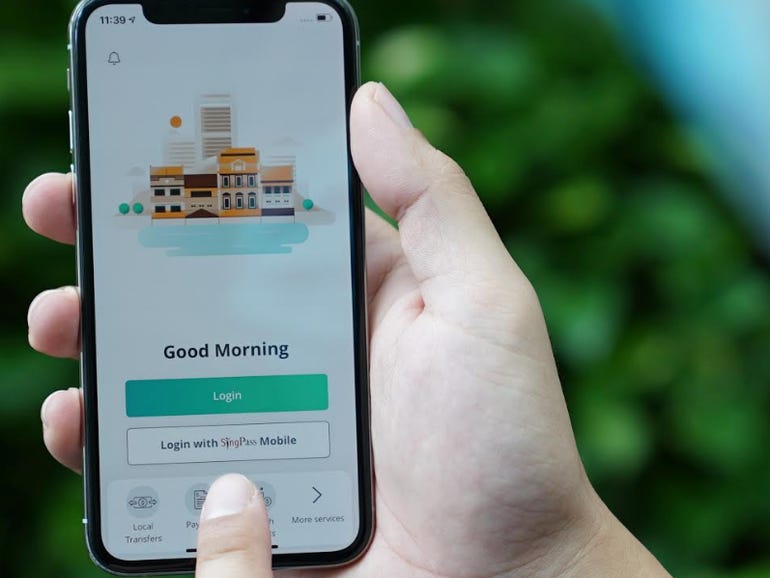 OCBC Bank used the Singapore government’s e-services mobile app, SingPass, to provide an alternative sign-in option for customers to access its own banking app. Currently used by over 1.6 million residents, SingPass provides access to the services of over 60 government agencies and, increasingly, is also being used by private companies as the Singapore government seeks to open up access to citizen data to facilitate business transactions.

The new login functionality has been enabled with the integration of digital banking access with the National digital identity platform, OCBC said in a statement Thursday. Introduced earlier this month, the sign-in features would reduce the need for customers to remember multiple user IDs, passwords, passwords or PINs to sign in to their various digital services, said the Singaporean bank.

SingPass Mobile is available for download on Google Android and Apple iOS devices, and offers users the possibility to authenticate their login credentials using fingerprints or facial recognition as well as a six-digit passcode. OCBC customers who have downloaded the SingPass Mobile app can click the “SingPass Login” button when launching the mobile app or the bank’s internet login page, and scan the QR code to initiate the authentication process. .

Is Singapore ready to rule a digital population?

Amid the country’s accelerated digitization efforts and as voters head to the polls, the Singapore government must realize that it also needs to transform the way it engages its people, who will increasingly demand responses to as more and more people come online with their personal data.

Customers who log in with their SingPass account information will have access to all of the bank’s services available on its mobile or Internet banking platforms. The bank currently has 1.8 million digital customers in Singapore.

OCBC told ZDNet that its product and platform specialists worked with GovTech to test the feature before its deployment.

When asked if the bank has put in place additional security measures, given a 2014 security breach impacted some SingPass users, the spokesperson said customers should use the SingPass Mobile app to facilitate a SingPass QR-based login, instead of the traditional passcode and PIN login.

“Signing in via SingPass Mobile is also integrated with our authentication and verification process to allow customers to access digital banking services securely,” the spokesperson said.

Its digital business manager for Singapore and Malaysia, Aditya Gupta, said in the statement: “Offering SingPass – a reliable and widely used digital authentication mode in Singapore – as an alternative connection, will give more of our customers the confidence and ease of banking with us digitally. “

Monetary Authority of Singapore CFO Sopnendu Mohanty noted that “seamless integration” between public digital infrastructure and essential services is the foundation of the digital economy. He added that the government agency has worked closely with the financial sector to foster the adoption of such digital infrastructures, such as national digital identity, to facilitate this integration.

OCBC in June 2018 had used MyInfo to facilitate the opening of deposit accounts, integrating the national data platform with the bank’s real-time digital knowledge of your customer (e-KYC) process, before expanding the service in February this year to include mortgage and auto loan applications.

“Three out of four credit cards are acquired digitally and three out of four deposit accounts are opened digitally using MyInfo,” the bank said. “Integrating MyInfo into the digital product application process has enabled OCBC to offer 60-second approvals for auto loans and 60-minute approvals for home loans. One in three home loans and two auto loans out of three were approved and accepted through this process within four months of its launch.

The Singapore government in recent years had opened access to its MyInfo service, making it easier for private companies to leverage a range of citizen data to process various transactions. It was offered through the MyInfo Developer & Partner portal, then integrated with the National Digital Identity Platform (NDI), to allow developers to access NDI API specifications, online tutorials on the development process and using a sandbox to test new applications.

MyInfo was first launched in early 2016 as a way for citizens to automatically fill out government forms online with their personal information. The service was then based on voluntary registration, but later made mandatory for SingPass users.

The Singapore government then assured that the integration between the two would not leave user data less secure. Over the past year he had is committed to adopting new measures to strengthen its cybersecurity posture and improve the way it protected public data – a move that followed a series of security breaches involving government agencies.

In February 2020, the government unveiled plans to invest SG $ 1 billion over three years bolster its cybersecurity and data security systems, which it said was essential as its agencies increasingly embraced technologies such as artificial intelligence, the cloud and the Internet of Things.

1 in 5 COVID-19 patients diagnosed with psychiatric disorders within 90 days, study…