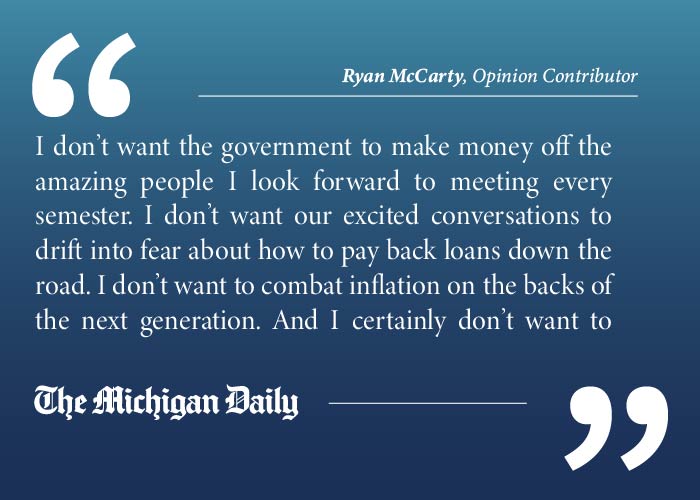 As someone who tutors incoming students, fall is an exciting time. I can watch all these beautiful humans explode into new things. There is so much potential. As a first generation student myself, I often find myself having conversations with other first generation students. Sometimes it’s amazing, because I can see new students gaping at all the possibilities available to them. But often there is a lot of nervousness, especially around the amount of debt needed to come to the University of Michigan. These students can expect to graduate from undergrad with tens of thousands of dollars in debt, sometimes with rapidly accumulating interest on top of that. Nationally, student debt burdens are worse for first-generation students or those from disadvantaged/working-class or racially-minority families.

So, I am always worried about my students. But this year has been particularly troubling for me, in large part because of something we don’t hear enough about: the relationship between measures used to target inflation and rising student debt.

There is no reason to go very far in runaway inflation and the Federal Reserve’s interest rate hikes in response. This discussion is happening literally everywhere else.

What we need to talk more about is that these solutions have imposed a disproportionate share of the damage caused by inflation on students. This is because when the Fed raises interest rates to slow inflation, the yield on 10-year Treasury bonds increases. Basically, these rates are what the government pays people who invest in them – the yields on US debt. For students, this is important because, since 2013, student loan rates have been linked to Treasury bill rates. The cost of student loans is tied to the cost of federal debt. But there is one important thing to note: student loans are still rising by 2.05% on top of the Treasury bill rate. It’s true. Here in America, we charge our children more to borrow money for schools than the lender pays when they borrow money. We expect to earn money from the students who go to school.

This disgusting price spike is another example of how current financial policies are placing the cost of unsustainable capitalist growth on future generations. Young people are not the cause of current inflation rates, but they will be hit harder in the short term by a recession in response to rising interest rates. In the long term, they will also be worse off if they have to take out more expensive borrowing from their own future to stabilize the economy. Perhaps the most obscene thing is that when inflation eventually goes down, so will Treasury bill rates. But student rates are blocked. Students today will pay high rates on the loans they take out this year, no matter what the economy looks like when they graduate. Something has to be done.

Of course, there are many ways to do better with students. Eliminating student debt completely while moving forward to include college in our national promise of free universal public education would make the most sense. Restoring public university funding to levels that reduce the need for rapid annual tuition increases would likely help a little.

Biden’s recent decision to forgive some student loan debt is a welcome relief to some, but it does little to eliminate the unsustainable costs of education facing current and future students. As we push the President and Congress toward more comprehensive changes in education funding, we can buttress our arguments by pointing to concrete evidence of how current policies are designed go after the students. The way rates are calculated and locked in has been and still is predatory.

I don’t want the government making money off the amazing people I look forward to meeting every semester. I don’t want our heated conversations to drift into fear of how to repay the loans later. I don’t want to fight inflation on the backs of the next generation. And I certainly don’t want to continue the cycle of indebtedness that sustains this whole broken system. We can do much better.