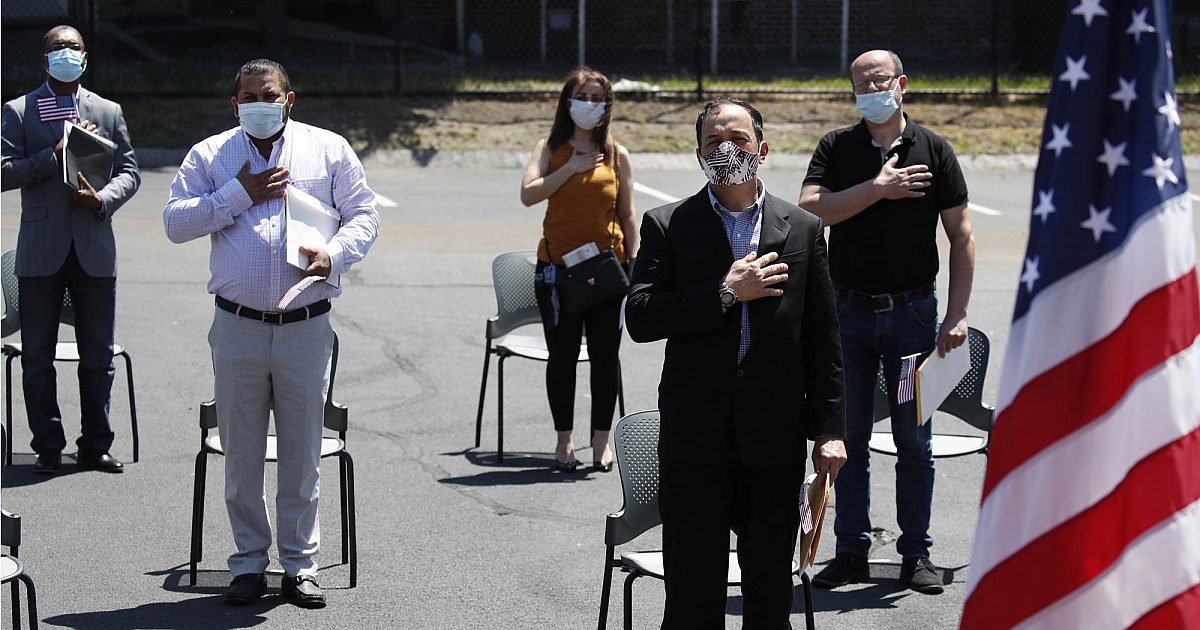 Bridge Community Church is a member of a network of immigration legal services called the Immigrant Connection. Since its inception six years ago, it has helped over 2,000 clients from 100 home countries.

“We trust because the Church is generally trustworthy of almost every culture in the world,” Szmara said.

Group services cost clients only about 10 percent of a typical immigration attorney’s fee. Yet the work has become more expensive over the years.

One of his clients is Ana Hernandez, a member of his congregation. Her parents brought her to the United States when she was a child, and she became a Deferred Action for Childhood Arrivals (DACA) beneficiary. Eventually, she married an American citizen and had a baby. The couple wanted to buy a house, but they also wanted to obtain Hernandez’s permanent legal residence.

“So they had this difficult choice, ‘Are we leaving home, are we just renewing DACA, or are we going ahead with the marriage petition? “Said Szmara, who married the couple. He prayerfully decided to waive office costs and loan them money to cover government costs: around $ 6,650 (which includes the estimated cost of immigration attorney fees, a renewal of the DACA, a marriage request and a request to adjust her status).

Szmara therefore expressed concern that the United States Citizenship and Immigration Services (USCIS) announced last year that they would more than double some of its application fees and abolish some fee waivers that help low-income applicants. The agency says such price increases are necessary for its financial survival.

On May 17, USCIS requested $ 1.2 billion in emergency financial assistance from Congress. The agency blamed its financial woes on the COVID-19 pandemic and forecast large budget deficits: applications would drop 60% through September, she said. But some experts say the Trump administration’s strict immigration policies are to blame for the agency’s current financial woes and the coronavirus has only exacerbated its problems. USCIS had forecast the budget deficit since November.

Another change: On Wednesday, the Trump administration began to suspend some temporary work visas, including H-1B visas for highly skilled workers, until the end of 2020. This will also affect visas for spouses of workers and other visas that allow companies to move employees overseas to offices in the United States. The stop will not apply to seasonal agricultural workers. The Trump administration said the move created more jobs for Americans, but business leaders who hire immigrants to say the move will slow job creation.

Szmara and other immigration watchers question whether such moves will exacerbate USCIS ‘financial woes by discouraging immigration applications.

USCIS is a fee-funded agency: it covers its costs with what applicants pay up front for various immigrant benefits. USCIS has forecast that more than 95 percent of its $ 4.8 billion budget for 2020 will come from application fees. The system has always served the agency well.

“When the government closed its doors two winters ago, USCIS was in good shape because we were funded by fees,” said Lora Ries, homeland security officer at the Heritage Foundation and former chief of staff. from USCIS. “Now it’s the other way around… due to COVID-19, government taxpayer staff can continue to work, but USCIS is affected.”

As the coronavirus spread, USCIS shut down in-person services, such as citizenship interviews and ceremonies, in March. It also permanently closed 12 international field offices and blocked the issuance of new green cards for two months. This reopened some national offices on June 4 and started restarting some in-person services on June 18.

USCIS initially said that without help by July 20, it would have to lay off about 13,400 of its 18,700 federal employees, even though it currently only spends on “critical activities” and salaries. then the agency rolled which date back to Aug. 3 and warned that downsizing would affect its ability to administer green cards and process asylum claims and work visas.

The agency plans to repay the money it receives by adding a 10% surcharge on claims on top of other previously announced increases.

In November, USCIS published notices in the Federal Register regarding its price increases: the cost of applying for naturalization would drop from $ 725 to $ 1,170, and the DACA renewal fee would drop from $ 495 to $ 765. . USCIS also wants to add a $ 50 fee to refugee claims. Currently, only three countries apply for asylum. The opinion are where USCIS announced the projected deficit of $ 1.26 billion.

Immigration experts say the administration has slowly changed the agency’s mission and policies to make the application process more onerous. This caused the costs to exceed the revenues. Behind-the-scenes changes added bureaucratic red tape and price hikes that may have deterred people from applying for immigration benefits.

“There is a very good chance that this has happened even without the COVID-19 pandemic,” said John Hudak, deputy director of the Center for Effective Public Management at the Brookings Institution, from left. “The president made specific immigration policy choices that have dramatically reduced the number of people eligible or willing to apply for one type of immigration status. This has significantly affected the ability of this agency to collect the fees to which it is accustomed. “

To a House subcommittee on immigration and citizenship audience In July, concerned lawmakers questioned the agency’s growing backlog. A witness from the American Immigration Lawyers Association (AILA) testified that the agency’s processing time increased by 46% between fiscal 2016 and fiscal 2018.

Meanwhile, rejection of applications has increased. The Cato Libertarian Institute find that compared to the last full quarter of the Obama administration (October to December 2016), the USCIS refusal rate was 80% higher for the first quarter of fiscal 2019. That meant more than 72,000 refusals during the quarter.

But advocates for the agency have said the price hikes are fiscally responsible. “USCIS gives up quite a bit of money every year,” said Ries, of the Heritage Foundation. “Historically and currently, we charge nothing for refugee claims: they are labor intensive and cost around $ 300 to process. “

“We are not a charity” noted Ken Cuccinelli, who previously headed USCIS and is now deputy secretary of the Department of Homeland Security, in September. “We are a control agency. “

The administration has put in place policies like the “public charge” rule. He denies immigrants green cards if he determines they were likely to depend on federal benefits such as food stamps. In the spring of 2017, Trump also issued a “Buy American, Hire American” executive order focused on fraud detection efforts, including increasing inspections of businesses employing foreign workers under the H-1B program. Critics said such measures could discourage immigrants from applying in the first place.

The agency received 1 million fewer petitions in fiscal 2018 than in fiscal 2017, resulting in a $ 152 million drop in revenue, USCIS says The data compiled by the Migration Policy Institute.

“Previously they partnered with you as you traveled together to [citizenship]”Szmara, the pastor of Indiana, said.” Now they want to say, ‘We’re here to protect those who are already here and make it harder for new people to come in.’

Congress has said little about the crisis, although immigration observers doubt lawmakers will let the agency that adjudicates asylum and refugee claims to put most of its workers on leave. Lawmakers could include a bailout for USCIS in another coronavirus aid program. But some have noted that Democrats in particular will be reluctant to allow more funding without something in return.

“I could see Congress playing hard and saying, ‘If you want funding to bail out the agency that you basically bankrupted because of your policies, you have to give into other areas of immigration policy.’ “said Hudak.

Sharvari Dalal-Dheini, 11-year former USCIS chief counsel and current director of government relations at AILA, said Congress should attach accountability measures to any bailout. She doubts lawmakers will let the agency sink: “We recognize that there are problems, many of which were created by USCIS through their own ineffective policies. But we also recognize that they have a very important mission to serve.

BOOSTit with new ingredients Elderberry and monk fruit to come