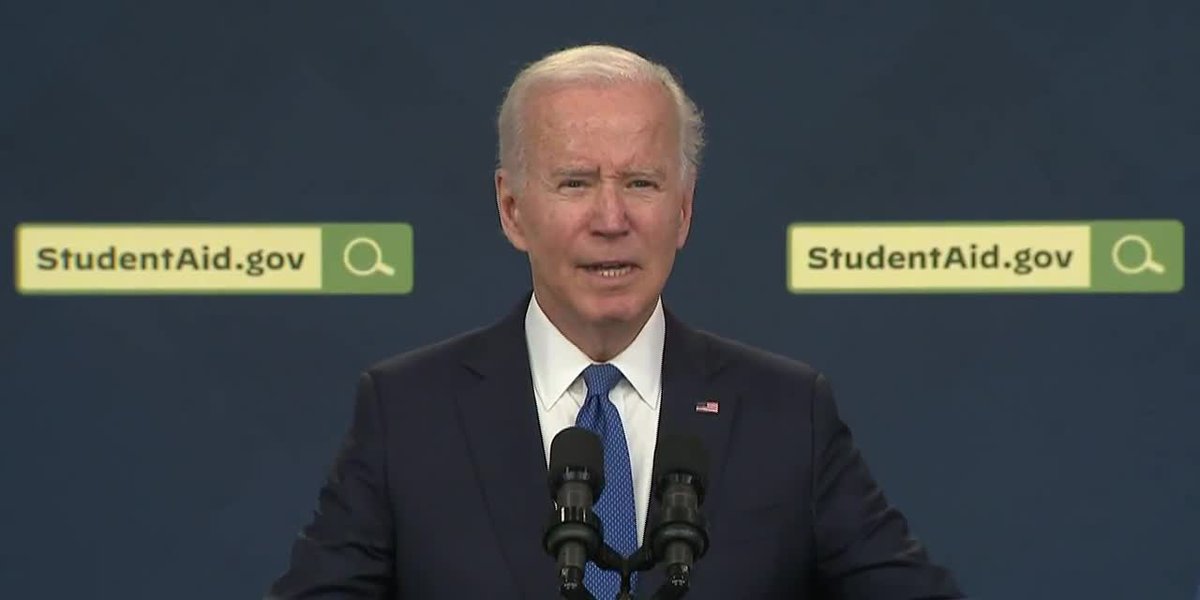 WASHINGTON (AP) — President Joe Biden officially kicked off the application process for his student debt forgiveness program on Monday and announced that 8 million borrowers had already applied for loan relief during the soft launch period. federal government over the weekend.

He encouraged the tens of millions of people eligible for potential aid to visit studentaid.gov and touted the application form, which the president said would take less than five minutes to complete. An early “beta launch” version of the online form released Friday evening processed the first stream of applications “without issue or difficulty,” Biden said.

“That means more than 8 million Americans are — starting this week — on the verge of receiving life-changing aid,” Biden said Monday, flanked by Education Secretary Miguel Cardona. The president called his program a “game changer” for millions of Americans struggling with student loan debt.

The number of borrowers who applied during the trial period already stands at more than a quarter of the total number of applicants the administration had anticipated, underscoring the popularity of the program and the eagerness of borrowers to avail of debt relief. Biden’s plan provides federal student debt forgiveness of $10,000 for those with incomes below $125,000 a year or households earning less than $250,000 a year.

Those who received federal Pell grants to attend college are eligible for an additional $10,000. The plan makes 20 million eligible for full forgiveness of their federal student debt.

Biden has promised to pursue widespread student debt cancellation as a presidential candidate, but the issue has been the subject of more than a year of internal deliberations amid questions about its legality. His plan has sparked intense debate ahead of the midterm elections, with Republicans and some Democrats saying it’s an unfair handout for college graduates.

But on Monday, Biden offered a full answer and defense of his decision.

“My commitment was that if elected president, I was going to make government work for the people,” Biden said. “This deployment delivers on that commitment.”

He also took aim at Republican officials who either criticized the plan or worked in court to defeat it.

“Their outrage is fake and hypocritical,” Biden said. “I will never apologize for helping American workers and middle class people recover from the pandemic.

Biden said Monday the White House has received more than 10,000 comments and thank you calls from borrowers. Indeed, thousands of people took to social media to share the form, and many said they submitted their applications with no problems.

The Biden administration touted it as a “simple and straightforward” app. It asks for the borrower’s name, social security number, contact information and date of birth. It does not require income information, but asks users to check a box that they are eligible under the program’s income limits.

This information will be checked against Department of Education records to help identify applicants who may exceed income limits, the administration says. These people will be asked to provide more information to prove their income.

It is estimated that between 1 million and 5 million people will need to provide this additional documentation, the Department of Education said in a recent submission to the White House Office of Management and Budget.

Creating and processing the form is estimated to cost nearly $100 million, a figure that has angered advocates who see the app as an unnecessary hurdle. The form is intended to help exclude about 5% of borrowers who exceed income limits, but proponents say it could also deter some low-income Americans who need the relief.

Once the Department of Education begins processing applications, borrowers should expect to see their debt forgiven within four to six weeks, officials said. Most applications submitted by mid-November will be processed by Jan. 1 — the day federal student loan payments are expected to resume after being paused during the pandemic.

Borrowers will be able to submit applications until the end of 2023.

The Biden administration is pushing ahead with debt cancellation even as it battles a growing number of legal challenges. Six Republican-led states are suing to block the plan, saying it oversteps Biden’s authority and will result in financial losses for student loan managers, who are hired to handle federal student loans and generate interest revenue .

A federal judge in St. Louis is now weighing the states’ request for an injunction to stop the plan. In court documents, the Department of Education pledged not to finalize any debt cancellations until October 23.

Biden acknowledged Monday that litigation is ongoing, but said his administration believes the lawsuits ultimately won’t affect the program.

The Associated Press education team receives support from the Carnegie Corporation of New York. The AP is solely responsible for all content.

The Student Loan Mess: How We Got Here

The State is moving forward with its loan repayment plan | New